J: Gerbil llama llama. Pronounced: ger-bilamallama. Bilamallama is three syllables, technically, but you should try saying it in just one. Or maybe bilamallama is five syllables. …either way, try to say it in one syllable.

J: Not enough people use my genius to have fun like you do.

C: You use my genius. I don’t mind.
I want to make ‘It’s on like gerbils‘ take, but i’m concerned about the ring of that.

C: Happiness is a warm kitty.

C: Every little llama is gonna be alright.

J: I was on the phone and it kept interrupting with new text noises what seemed like every few seconds.

J: Gerbil and llama, and you dare challenge my genius?!

C: Is cause i was sending texts every few seconds.

C: My genius. Mine. Mine. MINE. MIIINNNE!

J: There is no spoon.

J: The real little mermaid was the delusion of a drunken man who drowned a young girl in a fit of rage.

J: We can say, clearly, Hitler was a shark.

C: Hitler was an eel.

J:  What people don’t realize is all sharks are like Hitler.

J: That’s what they want you to think!

C: Frequently sharks make up the core of the Mer voting block.

J: That was during the Oceanic Wars of 1865. Everyone knows sharks jumped the Mer Party and started backing the Oceanic Buffet Party at least by 1910.

C: The T-Shark Party is widely moving back to supporting the Merfolk, especially on issues of whether or not the ocean president was even born in the ocean and on issues of oceantitlements.

J: It’s a moot argument. His mother was an oceanic citizen and an Amerifish. He didn’t have to be born in the ocean. Poseidon wasn’t and I didn’t hear fish complaining then!

C: Of course, we all know the T-Shark party is headed up by a hammerhead shark.

J: I like his catch phrase: “You’re out of order!”

C: But the T-Shark party says the president is spreading his commufish agenda and trying to make the ocean socialfishtic.

J: He’s the socialfish? Did you hear the crab sing the Mer propaganda song? …So typical of shark supporters.

C: I got crabs from that crab! It’s why I’m no longer a grouper-ie.

J: Red flag number one should have been when you realized he was a crab.

C: Speaker of the Fish Davy Jones is warning us about the ocean death panels that aren’t due to pollution. I believe him. He’s orange-y.

J: He lives in a bubble! He never leaves his locker! One of the most out-of-touch polifishians out there. 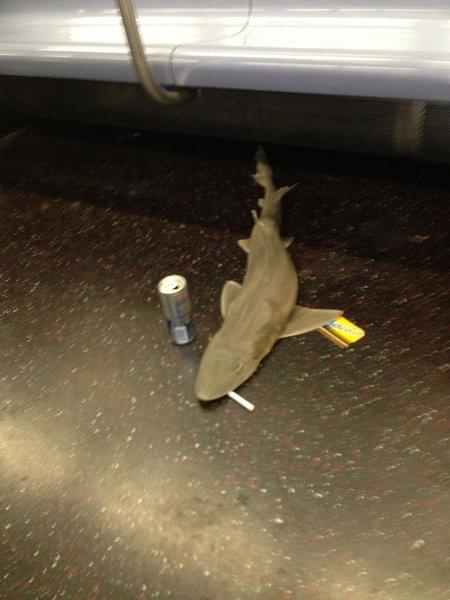 He was just going home after a long day.

C: Maybe the shark was just trying to get home and couldn’t afford a cab? Why did people have to mock the shark? I feel bad for the shark.

J: The shark was a scout. They’re just beginning to test our defenses. There’s a possibility they will attempt to use our public transportation against us. Or maybe just the subway tunnels. We never should have made Sharknado. It has only emboldened them.

C: Maybe he was riding the subway home after a long day on wall street. Maybe he was just trying to get home to his family. Now his family has no one to support them. How will they eat?

J: Maybe he should have thought about compassion before becoming a shark, or working on Wall Street.

C: He was just a janitor! He was cleaning up the muck of the actual Wall Street sharks left over at the end of a long day of trading. He was doing the best he could to support a wife and lots of kids who kept eating each other in the womb!

J: Sharks have parasites which clean up after them; they don’t need janitors! It doesn’t even make sense for a shark to be a janitor. Plus, sharks don’t get married.

C: None that you know. Also, there’s a gerbil named Lemmiwinks available for adoption.

C: I’m done with this argument. I’m sorry you’re frustrated with this. I was just trying to provide insight on what we talked about last night regarding industrial engineering. But I’m at work right now.

‘j: I have to decide between red and blue. Would you care to provide any input?

j: I can’t choose green; that’s not an option. Would you care to provide different input?

c: I’m done arguing with you.’

J: LOL/*cry*/LOL/*sob* (that was a hysterical fit between laughing and crying, fyi)

C: Now you know how I feel sometimes.

J: I do NOT know how you feel. I can’t even make sense of how you THINK sometimes  😦  Which, to be fair, may be hysterical.

J: Green! Gerbil! Purple! Gerbil gerbil cat! Don’t tell me what to do! Kitty! Jesus, some of your words weren’t even words. What would be the equivalent of ‘We’re gonna need a bigger boat’ for your brain?