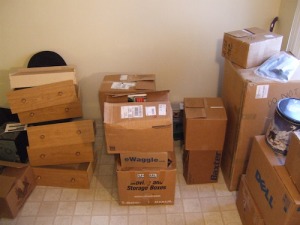 I was living alone in a two bedroom bungalow house, in a town where I knew only one person, where I had no job, an ex-boyfriend who wasn’t returning my texts or picking up his stuff, and it was Tuesday night.

At 10:30 p.m., I was in my bedroom packing clothes into boxes by season. I had been sorting, packing, purging, and organizing my stuff for several days. I was moving soon. I wasn’t sure when, or where to, but I knew I was moving. My rent was paid, though, so I had some time to decide what to do.

I had a month of no real obligations. With no job and an impending move, my days were filled with organizing and packing. When that got old, I would quilt or sit on my front porch drawing and painting while watching old seasons of the Real World/Road Rules Challenge. Sometimes I was overcome with listlessness and did nothing; then suddenly I would have a burst of energy and organize all of my books alphabetically by genre and color. I’d then wander from project to project to project, completing none of them. I didn’t know what I was doing next in my life, so I had a hard time deciding what project to tackle next.

The only certain thing was that I wasn’t going to stay in that house with the red door and red porch, tall windows and cream colored siding, fake vinyl wood flooring, huge backyard and slightly sloping kitchen floor. I wasn’t staying in Champaign, Illinois any longer than I had to.